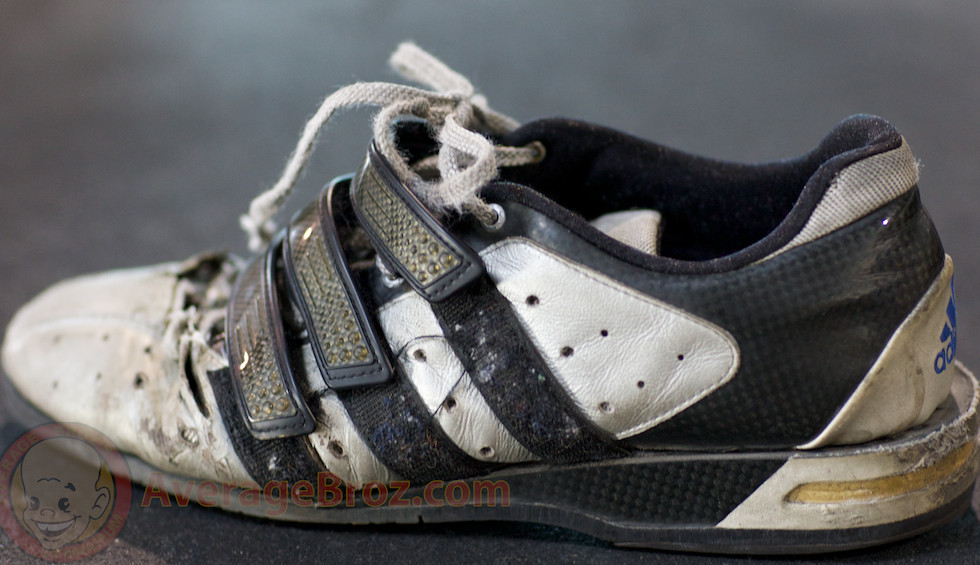 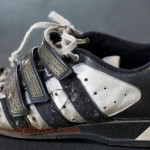 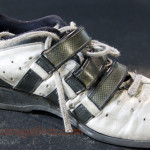 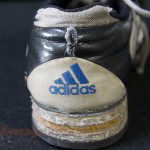 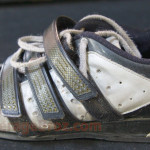 The Adistars were stellar!  No shoe lasts forever unfortunately, but when they are as extraordinary as these, you really want them to.

For the first few years with daily use, there were no issues.  After a few years passed, small flaws began to creep in.   Lifters with wider feet began to separate the sole and upper in the outer metatarsal area.  The softness of the kangaroo began to give way, and even with the three straps, which we initially felt  was overkill, they still couldn’t stop the shoe from tearing or losing lateral support.   It became common for the foot to slightly hang over the side of the sole.  The heel wore nicely, and no one had to get his shoes resoled; only the heel edge had to be glued when it began to flap.  The silver decoration that covered the heel began to peel off and expose the wood.

Every lifter was able to keep the original shoe laces the entire time they used them.  The velcro on the straps maintained its integrity and was still effective after thousands of uses.  When the 2008 Adistars hit the market and our 2004 Adistars began to show their age, most of us still avoided getting the new Adistars because the overall condition was still very good and didn’t need replacement — even after 4 years of thrashing.  When the 2012 Adipower was released, the remaining hold-outs finally had to retire theirs.

The things we loved most about these shoes were the ultra-comfortable leather, the firm wooden heel wedge, and its great looks.  The potential to customize the wooden wedge with additional heel height was a huge plus.  The new crew of Adipowers, Romaleos 2 and their compadres won’t allow that due to the new TMU construction that can’t be modified.  The majority of the issues we experienced were primarily cosmetic with little impact on performance.  The lack of lateral support was the main reason to replace the shoe.  It simply became too sloppy.

What more can you expect from a shoe?  Worn 4+ years through heavy daily training with more comfort and better looks than 99% of any Weightlifting shoe on the market today.

This is the shoe that you wish you would have bought 2 or 3 pairs of.  If you manage to find a pair for sale somewhere, snatch them up and enjoy for years to come. It will most likely be the best lifting shoe you will ever own.