So what is Culture?

Culture is the soul of a Gym, Business, Club or Team.  It’s what defines it.  It’s the reason why people associate with or be become part of it. 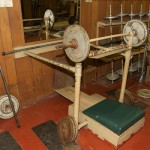 Here at ABG, it all began with my experiences.  I grew up in a very old-school gym.  Hand made equipment, vinyl half-moon gym bags, headbands, polyester bell bottom sweat pants, sweatshirts with the sleeves cut off, the smell of liniment and sweat.  Pull chain ceiling lights, two tiny obstructed windows that didn’t open, and one small one in the back that opened as far as its old, warped wood frame would allow– which wasn’t much.  The door was your only glimpse of the outside world.  The view was of inner city ghetto that you really didn’t want to see anyway.  When the door opened, everyone would stop training to look as if opening the refrigerator door at night.  It was a dark, dingy, old, and stinky place, but there was nowhere else in the world I’d rater be!  I miss that place.

What made this place so special?  The people and their attitudes.  It began with the head coach / owner.  He was a great man, an empathic man.  A man’s man.  Marine, Golden gloves boxer, Bodybuilder, and Weightlifter. His thundering laughs and never-ending stories kept you laughing and thinking.  The lifters were committed individuals–people who really wanted to be there.  Not people that were in and out, fly by night folks, but people who truly loved working out.  Driving from two hours away on weekends to come there was common place.  The kind of people who drop postcards to the gym on vacation to say hi, the kind where on their family holiday cards was a picture of young brothers doing a group deadlift.  Everyone’s expectations were high.  These people always expected more, the best from themselves.  Always aspiring to be better than the day before, in the gym and in life.  Good days or bad, they would always show up and put in work.  When someone hit a big lift, whether it was a PR or not, everyone would say nice job and really mean it.  People were truly happy for one another, and everyone fed off that positive energy.  It was contagious like laughter.  Great energy, big lifts, and laughs were the norm.  No matter how bad your day was, just being there made everything ok.  These were the happiest days of my childhood.  The mentorship that was provided by the elders to the younger lifters transcended lifting into life lessons.  The collective experience, history, and wisdom was just another reason to want to be a part of that gym.

We never listened to music.  Radios were not allowed.  Earphones?  Never.  The silence of the gym was broken by the clanging of iron, the banging of dropping heavy cleans, or just a simple question or story that someone would tell.  The stories became epic, and the group laughs loud.  The camaraderie that was developed lasted a lifetime for most of us.  Most of my friends I have today were met in gyms over the years.  Regardless if my friends still compete or even lift at all, we still remain friends.  It’s the bond  you make when you train hard, share pain, excitement, frustration and joy with other warriors of the iron game, regardless of sport.  Bodybuilding, Powerlifting, or Weightlifting.  It didn’t matter.

We always showed respect to each other. 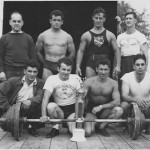 Respect by paying attention and not walking in front of someone when he were lifting.  To be attentive of how much others were lifting and to help watch their form.  To help out as you would want to be helped.  To be quiet and stop — regardless of what you were doing, even mid-set when someone was attempting a PR or huge lift.  To not walk over a loaded barbell.  By not putting your feet on the plates or stepping on plates lying on the floor.  To put your stuff away and go the extra mile to help keep the place tidy.  By not showboating, screaming or slamming equipment.  To be humble, modest, and grateful.  By being a true sportsman and to genuinely care for your other lifters, like brothers.

There were times when someone didn’t fit the mold.  Could be they were obnoxious, disrespectful, loud, or rude. It didn’t matter.  The owner simply told them to leave and never return.  When I was younger I clearly understood.  They didn’t fit in.  They weren’t one of US.  As I got older, I realized that he was actually throwing money out the door.  He was firing customers.  It was then I knew why.  Like a father to us all, he was protecting the integrity of the gym — its culture.  It must be preserved and cherished at any cost, even if he lost income.  He clearly knew culture is what makes a house a home, and what makes an old building in the ghetto the coolest place in the world.

My goal at ABG is to duplicate that environment the best I can.  We have ejected people who didn’t fit our culture.  Not because of how much they lift, but because of their attitude and the negative effect it has on everyone.  We have also embraced homeless kids, total strangers, and visitors with open arms.  It’s all about attitude. 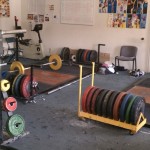 When I first started ABG, it had no name.  No ideas of becoming a gym or even a club.  At the time I owned a granite countertop business, along with a mortgage company.  I was so busy with both that it became difficult to make it across town to train, so I took a small room in one of my offices that was supposed to be a showroom for the granite, and moved some of my weights in.  I began to train daily, but it was not as fun or as effective as it used to be.  Even at the now-closed Golds Gym on Flamingo, where I lifted for over ten years, there were other bodies around.  They were not Weightlifters, but it didn’t matter to me.  That place had culture.  It was THE gym in Vegas.  All the “hard core” people would flock from all directions to train there.  It was the dumpiest location of all the Golds’, but for serious people, the only one.  Because there were like-minded people there, regardless of sport I was able to train effectively.  After I moved my things out of there and into my makeshift gym / showroom, I needed to create an atmosphere.  I went to the National High School Power Clean Championships here in town and asked some of the class winners who were seniors if they wanted to continue to do the lifts after they graduated.  A small group took me up on my offer.  My motive was simple: Get like-minded training partners to build an atmosphere that I could make gains in, as could they.
It was not because I wanted to coach them, and I didn’t recruit them with lofty goals of world domination and Olympic glory.  My sole motivation was to benefit myself as much as them by providing an awesome place to train for guys who live to lift.  I chose class winners because I wanted their mentality around me.  To be the best, you must so desire.  Winning does not happen by accident.  It happens by design.  These kids had the same mentality I had developed, but they simply weren’t aware of it.  As time went on, I noticed they didn’t know fundamentals, gym etiquette or how to lift properly and I fell into the coaching role.  It was not my initial desire, but because I invited them it became my responsibility.  I’m grateful that it did. 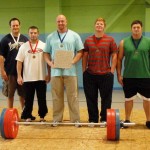 As others came by, they either fit in or didn’t.  People came, people went.  The like minded always stayed.  As time progressed, the word spread.  When like-minded people find each other the energy multiplies.  It attracted more like minded lifters.  As we grew, granite equipment slowly moved out, and more weights moved in.  Ultimately we out grew that space, so I sold those businesses, and we moved and and opened a real gym.  One of the lifters came up with ABG when we needed a name before our first team meet in Utah, which we won.  Average Broz’s Gymnasium was born.  I was an average lifter, so it all made sense.

Evolving from lifter to coach, I find myself telling stories about lifting and life just like John, my first coach used to do.   When John passed away a few years ago, I was the one blessed with the job of closing down that historic place, just as we were moving into the new gym.  It was as if the torch was passed from OHC to ABG, from one John to another.  I have the original outside gym sign hanging up inside at ABG as a daily reminder of where I came from and where we must go.  I hope I do him proud and keep that culture alive for generations to come.

Today we all try to do our best, regardless of what is going on in our lives, how much is on the bar, and whatever our age may be. This is what we are all about. Helping and encouraging one another, staying positive, and most of all telling epic stories and building life-long friendships.

If you find yourself in town and want to swing by, we love meeting and training with others like us.  It’s not how much you lift, but how you try that matters.