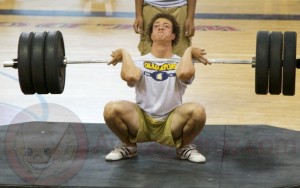 Unlike both the Las Vegas Open and the National High School Power Clean Meet, this one uses 11 weight categories. They were originally based on the 10 classes that were formally used by the IWF, then converted to pounds.  Then they decided to add another class between the former 67.5 and 75 kg class with one that’s about 71 kg, due to the number of high school students that were around that size.

This meet always has a tremendous turnout with lots of energy because of its long history, but mostly because each year there are multiple record attempts and great team spirit.  Each year the meet director gives out T-Shirts to all competitors. On the back, immortalized are the weight class record holders.