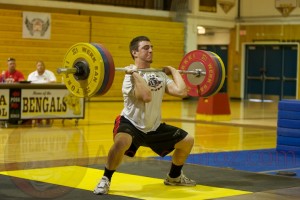 The National High School Power Clean Championship is the brain child of former Weightlifting National Champion / National Record holder, Norman “Val” Balison.  His idea was to get as many kids exposed to the classic lifts as possible, so he began this meet in 2004.  The competition uses the eight current IWF weight categories, converted into pounds.  Each weight class competes together regardless of starting total.  Werksan Barbells and Discs are used on the main platform.

Most years Val runs the meet with two platforms to keep the meet fast paced and exciting.  Having the two platforms also allows 2-300 kids to compete in less than 8 hours.

During “halftime” Val has a high level Weightlifter come out and do a demonstration of a fairly large Snatch and Clean and Jerk.  This exposes the kids to the other lifts they might not be familiar with or  quite possibly have ever seen before.

The term “Power Clean” is used because that’s how most of the high school kids refer to the movement, however, full squat cleans are allowed.  There are usually entire teams from out of state that come to compete. It’s quite an experience for high school lifters.

This has become a terrific talent pool for Weightlifting.  ABG team members who have been recruited from this competition include